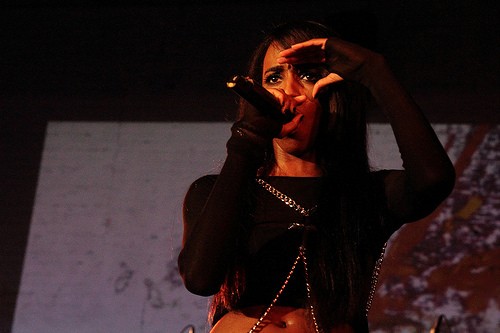 20-year-old Sky Ferreira is a popular model and rising music star to watch in 2013! Sky Ferreira’s career was influenced early by Michael Jackson, as her grandmother worked for and sometimes spent holidays with him. Sky’s long awaited debut album, “I’m Not Alright,” is due out later this year. With influences by Michael Jackson and such friend as Katy Perry, Ferreira will definitely become a bigger name in the music industry this year.

The 21-year-old rapper, Raykeea Wilson, well known as Angel Haze, is another rising music artist to watch in 2013. After signing with Universal Republic in 2012, Angel Haze is already kicking off the new year with an upcoming debut album and a collaboration with Azealia Banks. Her style is a mix between the fast-rhyming lyrical presentation of Twista and the hardcore sound of Nicki Minaj. Listen to her new album without the kids around, because it will be pretty raunchy both musically and lyrically. I’m sure when you hear her rap, you will be glad you are listening to!

“The Voice” Season 3 winner Cassadee Pope has a really promising year ahead of her as she signed a record deal with the Big Machine Label Group. Her talent should win her more fans in 2013 as she prepares for her debut album. She does not have so much competition coming up this year, because she is the only real country singer on this list.

Alana, Danielle, and Este Haim are sisters from LA which grew up playing music with their parents! Their single “Don’t Save Me” gained lots of attention, and it’s understandable that 2013 will be a great year for Haim. Even Azealia Banks and Katy Perry say they are really obsessed with them. Being often compared to Fleetwood Mac, Haim’s sound has been described as a mix of contemporary R&B and pop.

Zedd, also known as Anton Zaslavski, was born in Russia and raised in Kaiserslautern, Germany, by 2 classically trained musicians. After hearing the French electronic duo Justice, Zaslavski became interested in producing electronic music. 23-year-old Anton Zaslavski is a huge force to be reckoned with the EDM scene. Zedd and Lady Gaga made a bunch of new songs for her upcoming album ARTPOP. Zedd will definitely become a big name in 2013.

Jessie Ware is a rising British soul singer who will make her way to the U.S. this spring. Jessie doesn’t go along with the cockiness often associated with the Nikki Minaj or Drake side of R&B, she is more reserved and that makes her more likable by the majority. Jessie Ware is sure to become a rising music star in the U.S. in 2013!

Twenty One Pilots is an American pop-duo from Columbus. Drummer Josh Dun and frontman Tyler Joseph have already built a dedicated following which can grow with their debut album “Vessel.” Twenty One Pilots’ music style combines rap, synth pop, and some other elements, and create a sound that is absolutely unique. The first single of their debut album, “Holding On To You,” seems to be a great introduction to the band. The creativity and oddness these guys bring will surely land them at the top soon.

Last spring Joey Bada$$ got the hip-hop world’s attention with the release of his mixtape, “1999.” Joey’s mixtape showed a maturity and appreciation for old school hip-hop. Joey Bada$$ seems to be a breath of fresh air in hip-hop today. His recent collaboration with legendary producer DJ Premier, “Unorthodox,” is a merge of two absolutely different eras that hip-hop needs right now.

What do you think about these music stars? Are there any other music artists to watch in 2013? Share your thoughts, please!