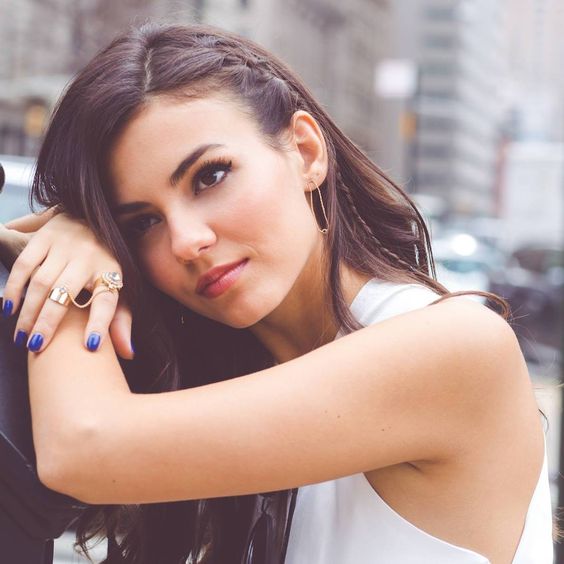 Whether you know her from Nickelodeon or have heard her music, Victoria Justice is an enduring star that deserves recognition for her talents. It also helps that she is an incredibly interesting and real person. There is a lot to be learned about this young idol because she is more than her role in Zoey 101 and Eye Candy. Here are seven facts about Victoria Justice you did not know:

The two were dating from early 2011, and their relationship was put into the spotlight when Rottham got arrested for a DUI. Though they seemed to go strong despite that, the two separated in December 2013.

2. She can do an incredible thing

How many of you can do this? To quote Victoria about her weird talent:

“I can do this thing called the ‘eyebrow wave,’ where I can move my eyebrows in a… wave-ular motion, whatever you call it.”

Because I too like doing strange things with my eyebrows, I tried to do it and failed. I would like to this “wave-ular” motion in action. Honestly, I cannot even imagine what that looks like.

More: 9 Interesting Facts about Will Smith

3. She chose acting as a child

When Victoria was 8 years old, she saw some commercials that inspired her to become an actress. In fact, her very first commercial was an Ovaltine one that you may very well know. Other commercials she starred in as a child include Peanut Butter Toast Crunch and Mervyn’s ads.

4. She sang in Spectacular!

Did you know that Victoria starred in the 2009 Nickelodeon film Spectacular! and sang three songs? The movie is currently one of Nickelodeon’s most popular films. Those titles were called, “Lonely Love Song,” where she was joined by Simon Curtis and Victoria Justice; “On the Wings of a Dream,” also sang with Simon Curtis; and “Everything Can Change,” sang with Simon Curtis, Nolan Gerard Funk, and Tammin Sursok. These songs are still popular today.

5. She boasts tons of talents

When the first show of Victorious came out, it was based on her talents, not just acting but singing and dancing. Her character was known as Tori Vega. The day the pilot came out on March 27, 2010, it received 5.7 million views, and it was the second-highest rated premiere for a live-action Nickelodeon series. However, it was randomly cut from airing a while back. This came as a surprise to many viewers.

6. She is amazingly active

On September 30, 2010, she teamed up with Girl Up to help with the official launch in New York City. She also joined in with the “Unite the Girls” tour, traveling to cities across the U.S. to activate and engage teens around the coastline.

Victoria has also supported children’s hospitals. Around 2012, she appeared in the “Music Makes it Better” campaign launched by Children’s National Medical Center.

Her two most recent roles as of 2017 are the remake of the Rocky Horror Picture Show, where she shined in her musical performances. Later, she was cast into a role for BCDF-produced “The Outskirts,” which features two other Nickelodeon child stars she had met onset of Victorious. The film will not make theaters but will be distributed through on-demand.

Victoria Justice is not fading from the limelight anytime soon. Her musical prowess and acting skills are sure to land her more jobs in the future. Keep watching for this young star to light up the night.

9 Interesting Facts about Will Smith