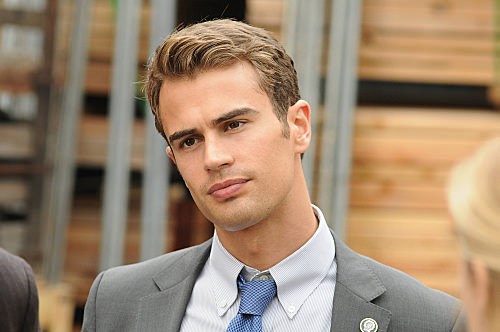 The hit science fiction movie Divergent shows a dystopian vision of the future. To fans of the movie’s leading character Tobias “Four” Eaton, though, it might as well be set in heaven – to them, British actor Theo James, who plays Tobias, is about the most beautiful man ever to grace a screen. As far as his fans are concerned, he isn’t the “next” big thing – he is the biggest thing there is, right now. Here are 10 reasons why the world is head-over-heels with Theo James.

To Theo James’ fans the actor is preternaturally perfect to look at. His fans believe that he is so beautiful, he could make a hit of a terrible movie just by being in it. Underworld Awakening is often offered as an example.

Theo James is musically gifted. With his friend Will, he is in his own band: Shere Khan. He is the band’s lead singer and guitarist. One of the band’s biggest hits was a cover of the Spice Girls song Wannabe. While the band has gone into hibernation now, Theo continues to pursue his musical interests.

3. His accents are wonderful

It’s a movie cliché that anyone with a British accent makes American women go weak in the knees. In the movie Love, Actually, the character Colin Frissel goes to America just to see how successful with women he can be with nothing to offer but his Britishness. He succeeds in a spectacular fashion. Theo James’ British accent does actually do a lot for the love he gets in America. But he is dedicated to his craft and works hard on his American accent. He is known to quickly change to his British accent when he needs to make an impression on a lady, though.

In his free time, Theo doesn’t just play baseball or go cycling. He goes free diving – a sport where you dive into the depths of the ocean as far as you can go, without oxygen. Theo’s personal record is 54 feet. Great results!

5. He loves his parents

Theo is quick to give credit to his parents for everything he’s achieved. His parents raised five children on a limited income, and were still very generous, he says. The actor proves that it’s not all about money, it’s all about love and respect. While so many young people blame their parents for their miserable childhood, Theo shows a good example – love your parents for who they are and help them whenever possible.

In interviews, Theo says that he was a bad boy, growing up. While he has cleaned up his act more or less, he still has a scandalous sense of humor and a foul mouth in interviews. In that way, he still is somewhat a rebel.

7. He cares about his fans

Theo constantly keeps in touch with his fans. When his CBS show Golden Boy got a good time slot, he did a live event with his fans, answering their questions and keeping them updated. He even dropped a few spoilers, just for them.

Theo James does know that he looks good, and that he gets an easier ride in life because of it. In an interview, though, he said that while he knew that his looks had a lot to do with how he got great acting assignments, he realized that to keep those jobs, he had to work hard on his acting skills.

Theo is more than simply a great actor with personal maturity – he is intellectually gifted, too. He has a degree in philosophy from the University of Nottingham to prove it. Believe it or not, but most famous people think about a degree too.

Theo James was born Theodore Peter James Kinnaird Taptiklis. His last name is Greek; it comes from his paternal grandfather who emigrated from Peloponnese in Greece. Theo speaks some Greek, too. When he interviews for Greek TV channels, he sometimes speaks a few words for his fans in that country.

Whether you admire Theo James for his real life personality or for his role in Divergent, you may want to know more information about him. These are some of the best reasons to love him. Perhaps you have your own reasons to admire him so feel free to share them with us in the comments section.