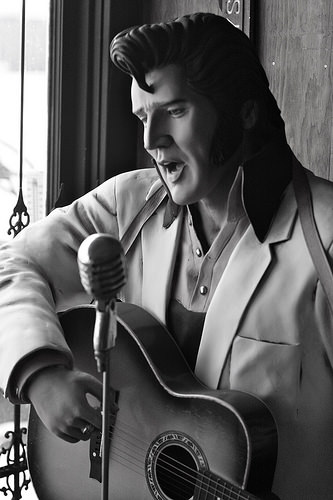 Only one person could surpass all the others on this list in terms of popularity, success, and status as an icon. The greatest Hollywood tragedy was the loss of singer Elvis Presley. Before he was the King of Rock ‘n’ Roll, Elvis made the rounds on the Gospel circuit in the south as a Southern momma’s boy who had a rich voice and energetic performances.

When his first album was released, Elvis was on the course to become the biggest recording artist in America. Despite the fame and success, including stints in Hollywood films to augment his income at the urging of his manager Colonel Tom Parker, Presley remained a loyal family man. He provided for his mother throughout her life, married, and had a daughter.

His frustrations with life in Hollywood began to show up in his daily habits. Elvis turned to food, drugs, and alcohol to soothe his woes. When his mother died he seemingly quit living. He continued to abuse food, drugs, and alcohol and became an overweight shadow of his former self. The King of Rock ‘n’ Roll was found dead at his Graceland home on August 16, 1977 as a result of a massive drug overdose.

Famous people often ruin their lives. Maybe it’s just a cruel twist of fate or unknown circumstances, we don’t know, but we will never forget these ten celebrities and their tragedies.