Looking for some romantic movies to watch tonight? These are great movies to watch with someone or on your own – they are sure to leave you feeling good, and knowing that love is always in the air! 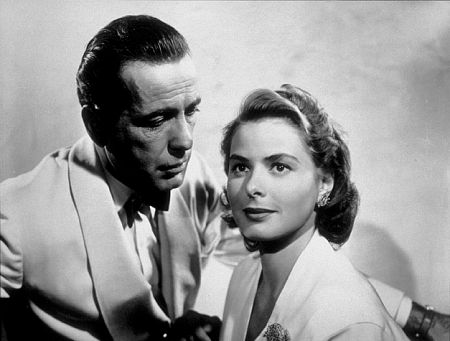 Casablanca (1942) is the ultimate Hollywood romance. Set in Morocco in WW II, the ex-patriot owner of a bar, Rick, has to choose between Ilsa, the love of his life, or helping her husband in the Czech resistance against the Nazis. He’s never stopped loving her, but he never expected to see her again. When she walks into his place, it’s obvious she feels the same way, but her devotion to her husband’s cause drives her most of all. European exiles and refugees from the ongoing war were extras or played minor roles. In a special moment of “dueling anthems” many of the actors were crying and someone observed that he realized they were real refugees.

The film has classic moments that are part of the English language: “Play it again, Sam,” “Here’s looking at you, kid,” “We’ll always have Paris,” “Round up the usual suspects,” “This is the beginning of a beautiful friendship.” The film won three Academy Awards for Best Picture, Best Director, and Best Screenplay. It’s become iconic and rated as one of the best films ever, but what gives it this power is the tension and chemistry between Rick, played by Humphrey Bogart, and Ilsa, played by Ingrid Bergman. It hasn’t lost any of its power.