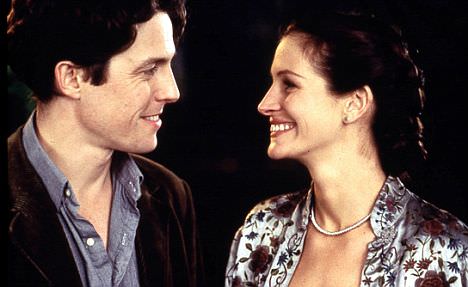 Notting Hill became the highest grossing British film released in 1999. Starring Hugh Grant and Julia Roberts, it also features a small part by a young Hugh Bonneville (the Lord Grantham of Downton Abbey fame). Grant plays a bookstore owner who finds a famous American actress in his shop. Though hapless as a lover, Grant discovers Julia is interested in him, and that his way of life enchants her because of its normality (despite odd moments that are in quintessential Hugh Grant style).

Great comic scenes are also provided by Rhys Ifans as Grant’s Welsh roommate. The locale is the real and unique Notting Hill in the Royal Borough of Kensington. The two keep meeting up, but their relationship sets off a news frenzy that threatens to keep them apart. The film has a great screenplay and wonderful acting – not a wrong note anywhere, and plenty of laughter follows their evolving romance. The film won a BAFTA.