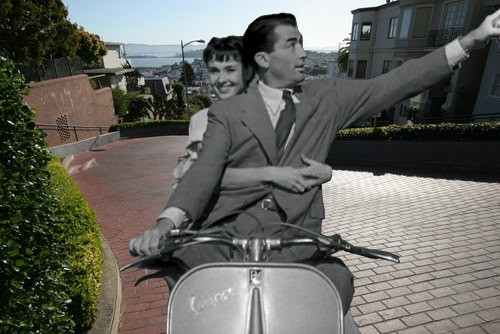 This is a captivating and utterly romantic caper that takes place one summer in Rome. Princess Anne (Audrey Hepburn), arriving in Rome from an unnamed country, is eager to be free of the confines of conventional court life. She escapes from her royal entourage during a visit to their embassy. She manages to get a ride in the back of a delivery truck, and no one knows where she is. Falling asleep on a park bench, she is discovered by Joe Bradley, an American newspaper reporter, played by Gregory Peck. He takes her back to his apartment where she sleeps on his sofa. The next morning Joe dashes off to cover the Princess Anne press conference, unaware who she really is. When he does discover her true identity, he sees it as a way get an exclusive interview, without her knowing. He and his cohort Eddie Albert, a news photographer, work out a plan. But then, instead, Joe discovers Anne’s endearing ways have drawn him in and he begins to fall in love with her, and feels he must tell the princess the truth.

The film received an astonishing ten Academy Award nominations. In this, her first film, Audrey Hepburn won an Academy Award for Best Actress. The director William Wyler was already highly acclaimed for his direction of Ben-Hur and Funny Girl.